Juneathon Day 11.  A lazy Saturday after going out last night.  The Teenager and his brother didn’t surface until midday having still been still up and dressed on our return home at 11.30pm (oops!) and the Teenager having finished his exam week.  I had the usual  dilemma over whether to get up and put on running kit instead of getting properly showered and dressed to save repeating the process after a run.  Being somewhat tired, and fuzzy headed I took the least effort option but being hungry and having an achy Achilles I did not run first thing.   In fact I continued  to carry out my day, delivering and collecting the pre-teen, so he could keep his friend ‘safe’ from an excess of girls at his friends sister’s birthday party, collecting my car from the tube station where I left it last night, buying a birthday gift and so on all in my run kit with the excuse… ‘ I’m about to go for a run…’

Yes, my Achilles is still niggling.  I find that I get the most discomfort after wearing heels.  I don’t wear high heels very often (I can’t walk in them, because of weak ankles!  There-in lies the problem!) but when I do for an occasional evening, especially when I’m running a lot,  it hurts.  I’m therefore now going to spend the rest of Juneathon in my running shoes or fitflops!

Last week tryingtorun advised me to try an Achilles strap. I’ve researched them with a friend, who has a similar injury, and it looks like it could be a good option so I’m going to order one for support when running. We’ve also been advised to do regular exercises to strengthen our ankles  such as one-legged stair raises and one-legged squats.

In the mean time I’ve tried a tubie-grip bandage on my ankle for one run (helpful) but find the best treatment is to ice my legs and feet post run and then swathe myself in a compression bandage from knee to toes for the evening.

Not quite as comprehensive as this but still important! 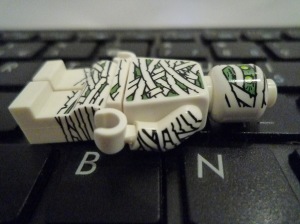 With wine O’clock fast approaching I finally got going just before 6pm today…  By then my ankle had stopped aching and I felt more confident for a slightly longer run. I headed for Hyde Park and a version of my usual to the Serpentine then loop back towards home.  I left in a rush and forgot my water and sunglasses so was choking a bit on the pollen grit in the air.  I really missed my sunglasses.  Not because it was sunny or there were lots of flies to avoid but because while moving to one side of the path to get out of the way for a park maintenance vehicle I ran under a tree and got a branch full in the face.  Ouch.  No harm done and no-one noticed so pride fully intact! I’m obviously not as short as I think I am and need my contacts prescription reviewing.  No wonder I can’t park if my distance perception is so bad!

My attempts to try to look unapproachable and oblivious to tourists are obviously not working.  On the return leg (Bee Gees fad still on full volume) I was asked directions by some french (?) tourists. Fortunately for them there is only one Princess Diana fountain and even I can’t mess up the instructions for straight on!

My lower legs held up for a little more distance but were feeling tight by the last half mile so no more today.

9 thoughts on “Lazy Saturday and Bandaged”