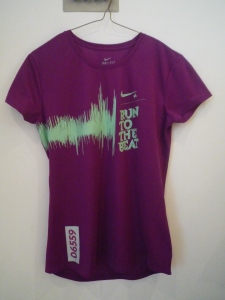 I got back to London to find that my race pack had arrived for Run to the Beat, the first of the 3 Half Marathons I have entered this Autumn. It includes a great T-shirt which focussed my mind that the race is 3 weeks on Sunday and I will not be able to run it.

My getting back to running after injury has stalled and I can’t yet run totally pain-free. A mile or two hobbling along slowly is about tops for now so no return to BMF yet for me and certainly no parkruns. (Insert sad face here). I am planning to seek more advice from another Physio next week and hope that I can at least contemplate taking part (slowly) in either or both of the Royal Parks Half and Great South Run in 5 and 8 weeks time.

I have also taken the rash step of temporarily re-joining the Notting Hill ‘Yummy Mummies’ gym (on a month by month basis) which I left 6 years ago when I discovered BMF. At least I can vent my frustrations there attempting to remember some of the finer points (breathing) of front crawl and have a go at spinning. OH was sceptical, reminding me that I never really enjoyed going there and used to be scathing about the unfriendliness of the majority of the other gym users. However, since then I’ve been toughened up by BMF so they will have to put up with the fact that I talk, (‘Morning!’), make eye contact and smile at them. At least it’s some form of exercise to try to maintain a bit of fitness (and avoid too much fatness) until normal running is resumed. Might also give me something interesting to blog about too!