Several factors came together today. Janathon, being on the Isle of Wight for the weekend, wanting to run 12 miles as part of my half marathon training and the fact that I have always wanted to run the 12 mile family circular cycle route on Isle of Wight known as route 13 or The Sunshine Trail. So that’s what I was determined to do today.

I also persuaded my whole family to come too, well it is a family cycle trail! All started well with no fights dragging the boys out or stress getting the bikes loaded onto the back of the car and we were off to join the trail at Merstone. We decided to run/cycle the route in an anticlockwise direction so we tackled the parts of the trail we hadn’t run/walked or cycled before and from reading the route details it meant we would have the toughest terrain to cope with over the first part of the route while fresh. 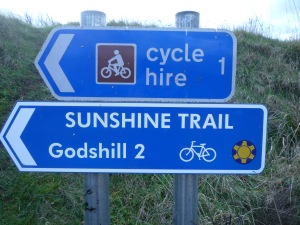 Plans started to go a bit awry after the first few yards when eldest son, riding on husbands old bike (because he has doubled in size since he last cycled) complained that the saddle was too wobbly to ride on. Husband, now riding his 35-year-old racer rescued from parents attic, suggested that son should put his weight on the pedals and it would be OK. After 3/4 of a mile of pot-holes we realised we wouldn’t be able to continue unless we could tighten son’s saddle but the spanner we had brought didn’t fit. Fortunately we were only a mile or two from The Bike Shed (where you can hire bikes if visiting the Island) which he cycled back to while we waited. The Bike Shed were fantastic, while they didn’t have a suitable spanner to buy they found a surplus scooter set that might fit which they gave to my husband. Thank-you Bike Shed.

We went on over dirt roads with pot hoes but generally flat going. By now we had wasted a fair amount of time so at the 2 mile point husband suggested that completing the trail was not going to be possible today and suggested that the boys and I went on for a further 2 miles while he cycled back to pick up the car and meet us at the 4 mile pont.

It turned out that the next stage (Godshill to Wroxall) was the “challenging off road mountain bike section“. (There is an on-road alternative I find for next time.) Mostly uphill and the road went from tarmac lanes and got narrower and rougher as it went upwards. At this point my run was a walk as I encouraged the boys pushing their bikes, moaning. (I later thanked my dear husband for leaving me with the boys to do the toughest part of the trail with the main climb and his response was “Well I can read a map!”)

We were however rewarded at the top of the climb by Capability Brown’s Fremantle Gate and then some of the best views of the trail. 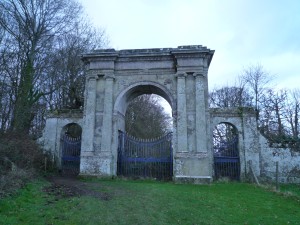 The trail then dropped down past Appuldurcombe House (English Heritage) and not long after we got to our meet point. Decision time for me. It was after 3 O’clock and light was limited. I’d run/walked 4 miles of trail and the rest of my family were heading home. Should I bang on and compte the remaining 8 miles to finish what I planned for today or go home and have to plan another long run tomorrow? Two gulps of tea and I left them to their Jaffa cakes asking to be collected in 80 mins at our stating point.

The trail continues on the old railway line from Wroxall to Shanklin, still scenic once out of Wroxall with country side either side of the raised track. After Shanklin the trail signs you onto roads through quiet residential streets which while being quiet are not scenic. At this point I didn’t follow the trail exactly, saving time and light by running straight down the main road on the pavement, and not taking the cliff path. So I didn’t quite connect with the start of the Sandown to Newport cycle way (route 23). Just as I was feeling a little lost running down a very quiet road having passed Sandown Academy I recognised where I was and knew I would cross the cycle-way from the Adgestone quiet road.

It was after 4 O’clock when joined the cycle path and getting towards sunset. I know the route well and that I had 4 1/2 miles to go. My Garmin read 9 miles and I didn’t really want to push my legs to run 13 1/2 miles, nor run the last stretch uphill to Merstone at dusk under the dark railway bridges. I therefore rang and arranged to be picked up a mile and a half nearer at the main road junction so I could cut out the last section of the run.

As I got the gate to that road crossing in sight my garmin clocked 12 miles so my planing was pretty good! 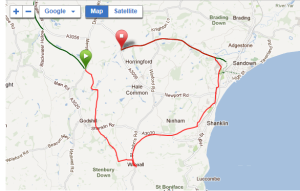 7 thoughts on “The Sunshine Trail”