Yes that’s right I get to run to some cool places!

I had a busy day trying to finish some work for a deadline so spent the day in my PJs tied to my laptop going googly-eyed! 6pm came round and I realised I still had to do my Juneathon run and we had nothing in for supper. I dragged my googly eyes away from the PC and finally got dressed (in my running gear).  A cunning plan was concocted and OH drove me to Niton where I could run the Undercliffe Drive to Ventnor and meet him while he went ahead to do the shopping.

The Undercliffe Drive from Niton to Ventnor is a quiet road, basically because it is subsiding and falling into the sea and the island can’t afford to repair it so there are one-way sections and larger vehicles are prohibited from using it.  Yay NO coaches! (but that’s why they’re on my local loop… grrr). I remembered in Niton about the hill so suggested the top of the hill, then remembered the steep down bit so suggested the bottom of the hill and then some idiot forgot to press go on the garmin for a few mins so my run got somewhat shorter! 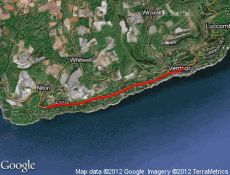 A good run, it was fairly light traffic with some sections where I was gloriously alone! Starting after 6pm probably helped and most cars behaved themselves with only one moron going too fast and getting my wrath after making me stop flat against the wall.  It is an attractive undulating route, mostly shaded under trees as it winds along just above the sea-line.  The reward at the end is lovely views and smells of the sea as the road opens out at Ventnor and then being stared at from the bus stop while running along Ventnor high street looking for the car.  As if they’ve never seen anyone go for a run before!

A highly recommended way to do the shopping, OH arrives at car with food just as I finished my run so we headed for home quickly before the hungry teenagers had eaten the furniture. 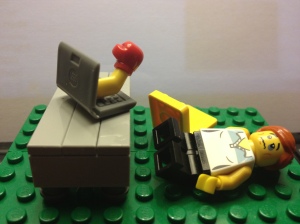 8 thoughts on “Running to the Co-op”

Leave a Reply to diary of a dashinista Cancel reply