We got to the Isle of Wight with no problems last night after the reported chaos of the day before, even with two cancelled evening ferries. Country to what the news would have us believe, the news the Isle of Wight is open for business and not flooded nor sunk by bad weather! It was water-logged fields which prevented festival goers from entering the mud logged car parks and caused grid lock on the island.. So business as usual and everyone is having a lovely, but muddy time at the festival. Although it was sad to read that some local pupils had missed their gcse exams because of the traffic problems on Friday morning and that the school (next to the festival site) has planned to close on monday. 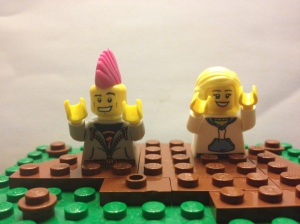 Anyway, this weekends Juneathon efforts have required a little more planning than normal because of the longest day challenge. The challenge is to run as many miles as you can in 24 hours, between noon Saturday and noon Sunday, or another 24 hour period. I had previously toyed with the idea of trying to run 24 miles (12 and 12) but as my week went on I was rapidly down grading my plans to 10 and 10 then 8 and 8….

I knew that Sunday morning was going to be the hardest to get some miles in as I’m not a morning person and my running options directly outside my door involve busy roads and many hills that are best tackled early not to mention on fresh legs! So I had in the back of my mind to see how my planned 10 miles went today maybe extending it to 12.

I fuelled up after a lie in with a big bowl of cereal and toast and prepared myself for the 12pm kickoff, driving up to the Merstone car park on the Newport to Sandown cycle path.

A really good run. I used today to further experiment with using gels for long marathon runs taking one as I set off and then another at my first turn around point at 5 miles. I’ve definitely found some gels that work for me at last, not having to make any unplanned pit stops nor feeling sick! I only had to stop to cross roads plus twice to re-lace my shoe and adjust my sock which was bunching up under my toes. I was pleasantly surprised how good my legs felt, especially after feeling so pathetic at BMF yesterday and think that the gels certainly contributed to that.

Having a great 1980’s playlist that I’ve not listened to for a while helped and I got a few looks from passing cyclists at one point when I was drumming along to the start of Enola Gay! I got back to my car at 10 miles and still feeling good carried on in the other direction for an extra mile each way to round the run up to 12 and my Juneathon mileage to 100.