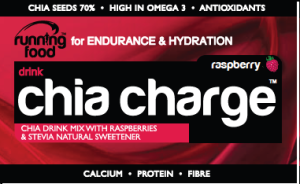 A while ago I was sent some samples of a new, natural, free from artificial ingredients, sports drink from running food. It’s a chia seed based drink just launched in the uk by a startup business and marathon runner. 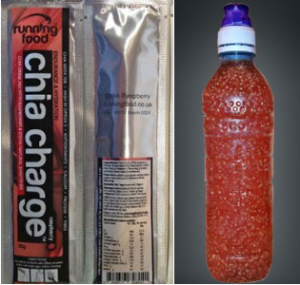 I was interested, I’ve never particularly liked or got on with energy drinks and I already put other milled seeds on my cereal, yoghurt and salads. I did a bit of research to find out that chia seeds are a new super food.

“With more omega-3 fatty acids than salmon, a wealth of antioxidants and minerals, a complete source of protein and more fibre than flax seed, the seeds have been dubbed a “dieter’s dream”, “the running food”, “a miracle”, and “the ultimate super food”, by advocates and athletes.” BBC News

The drink comes in the form of a sachet which you mix with 500 ml of water. It does have a unfortunate appearance of frogs spawn because it contains whole seeds but once you’ve had a few sips you get used to them. It has a nice natural raspberry taste which is a lot nicer than an initial smell suggests.

I drank the first sample before a BMF class (not wanting to spoil a long run… just in case!) it’s refreshing and hydrating and pleasant to drink. The only problem that day was that I was a little over hydrated (BMF instructors are always insisting we turn up for class properly hydrated so can’t complain when I had to run off for a pee!) but it was otherwise good and no adverse effects on my stomach.

I decided to save the next sample to try before a race so took one with me to sip before my half marathon last weekend. Lorraine, who I ran with, was interested, she puts chia seeds on her cereal and explained that the seeds absorb water and swell so stay in your stomach longer slowly releasing nutrients. I drank most of it before the race and although it doesn’t give you a full on energy rush of a sugar rich drink or gel, it provides longer term energy and hydration. I sipped water during the race to top up my hydration and took gels for energy. I think I found the gels much more pleasant to take because they weren’t hitting an empty stomach and I certainly didn’t get that awful empty stomach hungry feeling that I sometimes get around 11 to 12 miles.

All in all, a good sports drink as a supplement to pre-race breakfast, before a long run or race and as a recovery drink. I’m certainly going to get myself some more for my marathon.

You can read more about chia charge and running food here. 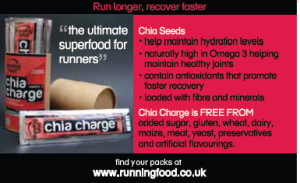