A race in two halves. A race I didn’t enjoy. 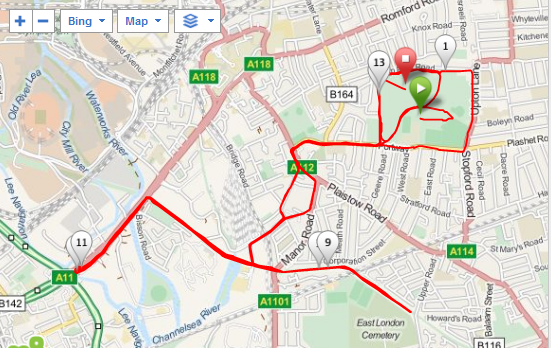 The first half (and lap one of the two lap course).

I started a little fast but then, although slowing with the increasing heat, was working well to maintain an overall average pace below 8.50. I found the course convoluted and a little dull. Much of it was on a cycle track the Greenway. This was the part I liked least. It wasn’t very green, all I remember is concrete and discarded water bottles. We started in the middle and did an ‘out and back’ in each direction with runners going both ways next to each other on the narrow course. At one end there was an extra out and back on a bit of dual carriageway (right next to a queue of buses and cars) and under a flyover. 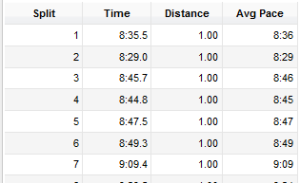 Back to West Ham Park and on to the second lap.

Can’t I just take the 10K finish funnel and call it a day? I can’t face running that over again. My mind is weakening and I’m sure I’m not feeling at all great. Is there anyone else running this race feeling the same? Fancy a trip to the pub instead?

But I had got up at 6am and travelled across London. I had to finish what I’d started and get the damn medal. If I left it as unfinished business I’d have to come back and do it again. That would be far worse than a second lap! I forced myself on but once the mind has lost its determination, holding pace is impossible and all the niggles surface. I stopped looking at my watch, it was hot and I was thirsty but drinking water made my stomach ache and my left calf and knee were cramping badly. I dragged myself to the end and for the first time ever didn’t raise a little sprint to the finish. 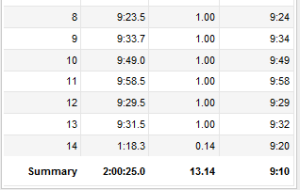 The race, organised by the Tessa Sanderson foundation had some organisational issues. Most were due to the increased scale of the new Half Marathon this year. We queued for 30 mins to put our bags into the baggage drop and then more than 30 mins to retrieve them. The Marshalls were friendly and willing but it was obvious that those manning some of the water stations had no experience of what works and what doesn’t. A little briefing could have made a big difference.

On balance I had a bad day which I contributed to myself. I was probably too optimistic in my starting pace for the warmest day in over 6 months and for my recent training. In hindsight I wore the wrong shoes which had made the outside of my knee and calf a little tight when I wore them over Easter so it’s not surprising I suffered over 13 miles. I also got my hydration and fuelling wrong for the hot day.

On the day there just wasn’t the atmosphere or environment to help me push through regardless. I won’t be back for another run of this race, mainly because I didn’t enjoy the course, but I suppose I’m glad I tried it once. 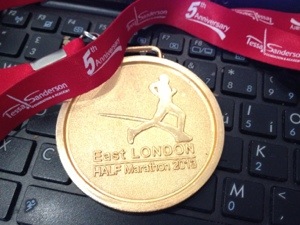 8 thoughts on “East London Half Marathon”