My bike ride yesterday made me realise how fortunate we are to live within cycling or running distance of some great sights in the centre of a wonderful city and that I must break out of my usual routes and run more of London’s streets.

I had to run 10-12 miles today so I followed a similar route to which we cycled. My route took me around 4 Royal Parks, from Kensington Gardens, Hyde Park, Green Park and St James’ Park.  I went through Wellington Arch, down Constitution Hill,  ran down the Mall, around past Horse Guards Parade and looped back to Buckingham Palace.

I was going to take some tourist snaps for this blog but realised when I got there I hadn’t brought my phone or camera (I have a new iPhone which I don’t want to ruin getting it damp in my pocket!)  so you’ll have to put up with my garmin map instead. 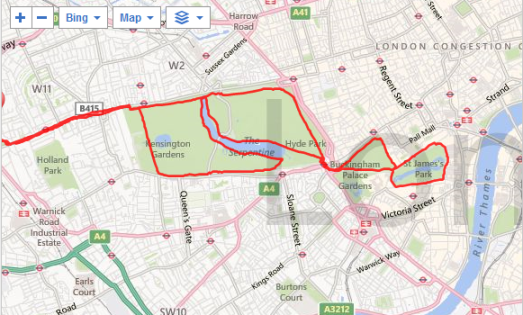 The first 3 miles were hard going (as usual) until the aches and niggles worked their way out and I settled into a good run.  As I ran down towards Buckingham palace and along the Mall it felt fantastic to be running a fresh route.  I was at the finish of the Marathon and where the Bupa London 10,000 is run; it was a mild sunny morning and I could almost feel and smell the start of a spring race.  I really felt the buzz, keen to get to the marathon  and motivated to run and run!

I should have run an extra loop of the Mall to make up the miles instead of my loop of the all too familiar Serpentine on the way back which felt a little less enthusiastic.  But all in all a very good run which I finished on a high with a grin!