Today’s run was a dark one.  I couldn’t run first(ish) thing (after waking up, drinking tea, chaffering pampered teenagers to school) because I had some deliveries scheduled for today.

Deliveries received, big piece of work finally completed, I had a pretty productive day. But then it was dark and I was feeling cold from sitting still all day. I have to admit all I wanted to do was collapse on the sofa with a glass of wine. But I rested yesterday, I knew I had to run for marathon training, Jantastic and Janathon so I pulled on a second layer and my long skins tights and forced myself out the door.

I went out thinking I’d dash off a ‘minimum’ 3 miler but as I started it wasn’t too bad although I had limited time. I knew I should really be running more like 5 or 6 miles with some intervals at 5K pace so compromised on 4 miles at HM pace (ish) in my (by then) over heated state.  To extend my loop I headed to the park but realised only when I got there that it was closed because it was dark and I would not be able to use that route for my turning right loop.  I carried on and then turned left for a different loop.  It was good to run new streets.  A few were a bit quiet and dark which sped me up but some were over busy and slowed me down with groups of people standing outside restaurants, bus queues and idiots walking along looking at their mobile phones.  At one stage I even had to hurdle a couple of rubbish bags!

I saw this on twitter today and laughed.  Tonight I got home at 3.94 miles, and yes, I ran past my door 3 times and got funny looks from passers-by running past them 3 times! 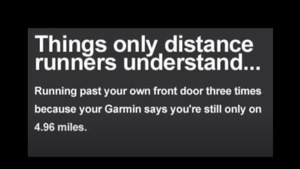