Really back this time.

Yes I know I should have blogged about it earlier.  I did get a nag from Cathy for not updating my marathon training and mentions from Sharon and Alma which nudged me back to my blog but I felt a bit of a fraud having a running blog when I wasn’t really running.

I have dabbled during Juneathon and Janathon, writing  a bit about my excuses for not running and the odd BMF class, parkrun or classy plank.

I’ve had false starts, comebacks and ‘return’ races.  I managed a 2 week run streak during Juneathon this year and a comeback 10K at the end of Janathon but I have not seriously run or trained for any event since the London Marathon in 2014.

Then two things happened.  I stood on the scales at Easter to weigh my son’s suitcase and I went to cheer this years London Marathon.  The mean old scales told me the truth I didn’t want to hear and watching the marathon made me think that maybe it wasn’t as bad as my memories were telling me.  I set about losing some blubber and my subconscious started thinking about running another marathon.

Facebook and wine don’t mix.  On May Bank Holiday Sunday evening I found myself entering a marathon with Cathy, Helen and Cassie.  It’s a flat one and the medal and goodie bag (beer and cake) are fantastic. (We’ll worry about the strong winds on the Kent coastal sea wall tomorrow!)

Fast forward to this Autumn and after a slow start I finally got into my marathon training.  I said I would run it –  so I had to grit my teeth and get on with it.   But I started to enjoy myself.  Regular running and being 12 pounds lighter have done wonders for my pace and stamina.  In October I ran a good HM at the Exeter Great West Run and felt really strong on a hilly course.  If I hadn’t had to make an unplanned loo stop I would have pipped my HM PB by a few seconds.  Mojo returned.

My previous attempts at marathon training have felt like a chore, hating the really long, long runs.  I can’t say I love them now,  and I could do with running a few more of them, but for the last weeks of my training I have had a new business like attitude to training and focus on my plan. 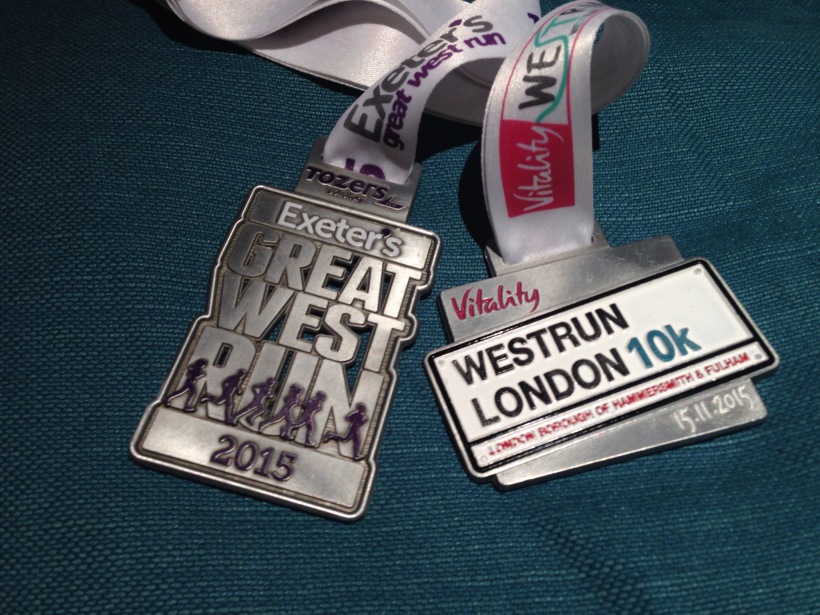