For the second day in a row I went without my weekend lie in and was up early for a race.  Yes this is very unusual, and new Juneathon participants might be right in  thinking that I’m showing off and pretending I’m the sort of person who jumps out of bed early every Saturday and Sunday and pops off to run a quick race.  Don’t worry it won’t last long.  It’s just the coincidence of Juneathon starting at a weekend and me actually getting organised for its start.  Normal service will be resumed sooner than you think.

A lot of people were out for the Regents Park 10K today, it looked like twice the number of people than I’ve seen for the winter races.  There must be lots of runners who are even more fair-weather than me.  Alma and I just about managed to get through collecting our race packs, dropping off our bags and the loo queue to join the start with seconds to spare.  It wasn’t however too busy on the course and some of the paths up by the Zoo have been resurfaced and widened since I last  ran this race .

I started the first of the 3 laps at the same sort of pace as my 10K last week,  overtaking people as I moved up the field.  By the second lap my pace was dropping.  I was too hot, my legs were feeling less than fresh, I wanted my lie in and I was hungry. (Excuses already, just what Juneathon is really all about!)  I  had a chat with a guy, who had obviously not read the race description, and asked if he really had to run 3 laps.  I congratulated the lapping front-runners and thought about pushing myself to correct my falling pace as people began to pass me, but I couldn’t be bothered.   I ran past the Zoo for the second time and saw a camel. I heard a Lion roaring, I think he was telling me to move my butt a bit faster but he was behind bars so I didn’t bother.

On my third and final lap my pace dropped further to my default ‘just run’ pace and more people overtook me than I passed.  I had a conversation with (I think it was) the same guy again, who was trying to remember how many times he’d  ‘passed Go’ and ‘was it all over yet?’  I explained that as long as he’d not stopped and had been running the whole time at his current pace he could stop in one kilometer.  I also told him if he sped up he’d beat me, so he did (such a gentleman).

In the final 400m I looked at my watch and realised I was in danger of finishing over 55mins so I finally picked it up and then, encouraged by the organiser, yelling ‘Sprint Finish!’ and ‘Race!’ through a loud hailer, my body stopped complaining and I ‘wellied it’ down the last 200 meters overtaking a number of people.

Not a brilliant race for me today, but 6.18 miles run (in 54.40) for Juneathon day 2 and a fantastic breakfast of poached eggs hoovered down, all before 11.30am.

For my first race of 2012 I went to the Zoo for a rather early (for me) run around Regents Park.  I joined fellow ‘Athoners* Alma and Carla (who have run one of this series of 10Ks before) and Louise.  It was also lovely to meet two ‘Athoners in person for the first time,  Katie and Maggie who had travelled in from Oxford and Manchester.

[* ‘Athoner – one who participates in mad running/exercise challenges such as running every day in January.]

The race was three laps of a mostly flat course, although Carla warned me about one slope which definitely got more like a hill each rep and there were certanly some slight changes in gradient along the route!  I started out towards the back and gradually overtook people bit by bit which I prefer to only being overtaken and is a good way of keeping up my motivation and maintaining pace.

My first mile was my slowest.  Not necessarlily due to my good planning or pacing but more due to waiting for the pack to thin out but it also gave me chance to judge how I was going.  I decided last Friday that 8.30 or 8.45 pace was achievable at my current weight** and fitness. By the end of the first mile or so I fixed on trying to keep up the faster pace especially as the first half of each lap felt easier with slightly more down slopes compared to the second half.  This was later revised to pushing 8 min miles on the good bits to make up for the effort to stay under 9 min miles on the bad bits!  Well something worked because I’m very pleased with my splits showing an even paced race.

[** I was discussing this with Carla before the race who’d read an article about how weight loss can improve run times in Runners world.  See her blog – we both agreed the stats are spot on!] 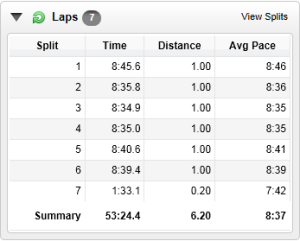 A well organised good-sized race in a lovely park.  Why haven’t I explored it before?  There was a nice stretch of the race along the back fence of London Zoo where I tried to do a bit of animal spotting.  I only saw a couple of camels!

Fortunately Alma and Carla had run this before and had found and tested a café near Camden tube where we could all go for breakfast.  Delicious! After a large latte, two poached eggs and bacon on toast I was fully restored and awake!