I woke up to the sound of wind and rain lashing on the roof and immediately decided that a morning road run in those conditions was not going to happen. Wake up take two and it was still blowing a gale and pouring with rain and I start to wonder about how where and when I can do my Janathon run.

The news and twitter were full of stories of storms, high winds with trees down and roofs blown off from Scotland all the way down south to here in the Isle of Wight.  Many Janathoners said they taking the sensible option of Janathoning indoors.  Some Isle of Wight ferries were suspended (“Storm in Solent; Britain cut off!”) and I wondered if the same might apply to Janathon? No I said to myself – its only day 3 and I can’t be a fair weather wuss and give up on my determination to run everyday.  I managed it last January and in Juneathon so I definitely wasn’t going to cave in so early.

At midday there was an absolute downpour and my Dad explained that it was clearing and the rain was the last of the front going through.  He was right (well he should be he’s a retired meteorologist) and by afternoon we had sunshine and glimpses of blue sky.

We are still on the Isle of Wight and when we were finally all agreed and organised, we set off towards the centre of the island to the cycle path where we could run, walk and cycle on hard paths out of the mud. There was not much time before dusk and the return of the rain.  A quick one today then.  I was running with younger son on his bike and to start it was slightly downhill with a strong wind behind us so we made a very good pace.  We did however note that the return leg would be harder work! 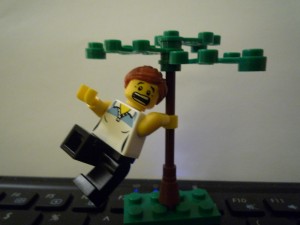